It seems like Portugal star Cristiano Ronaldo nine years at Real Madrid, is finally coming to an end.

Every summer for the past few years, the Portuguese forward has hinted at the possibility of an exit, although it has always ended up with him signing a new contract at the Bernabeu.
It was therefore very tempting to write off recent links to Juventus as merely a negotiating tool from Ronaldo and his agent Jorge Mendes. However, recent developments indicate that there is a genuine possibility of him moving to Serie A champions Juventus.
READ ALSO: Runtown to face jail term if… 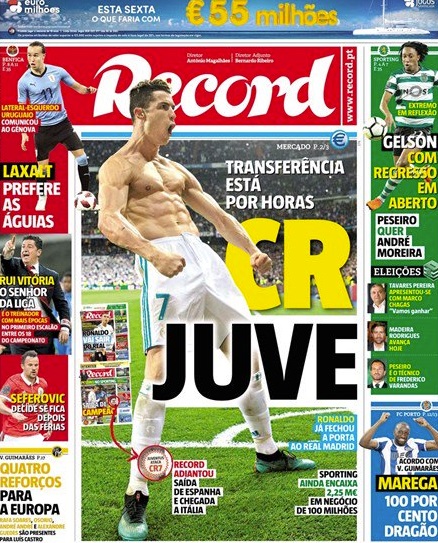 According to The Sun, a £500,000 per week deal has been agreed between Ronaldo and Juventus, meaning that all that stands in the way of the transfer going through is for Real Madrid to agree a fee with the Italian club.
It was reported recently that Real Madrid had lowered their talisman\’s release clause by €880m, presumably to encourage clubs to bid for him.
READ ALSO: Playing Elderly roles in movies is not wrong – Lil Win
Portuguese newspaper Record are now reporting that the deal could be wrapped up within a matter of hours.
Ronaldo is now 33, but according to AS, he wants to complete another eight seasons of football and play until he\’s 41 years old. That would be some achievement, and given his physical condition, is not beyond the realms of possibility.

Kofi Kinaata Hints Of Getting Married