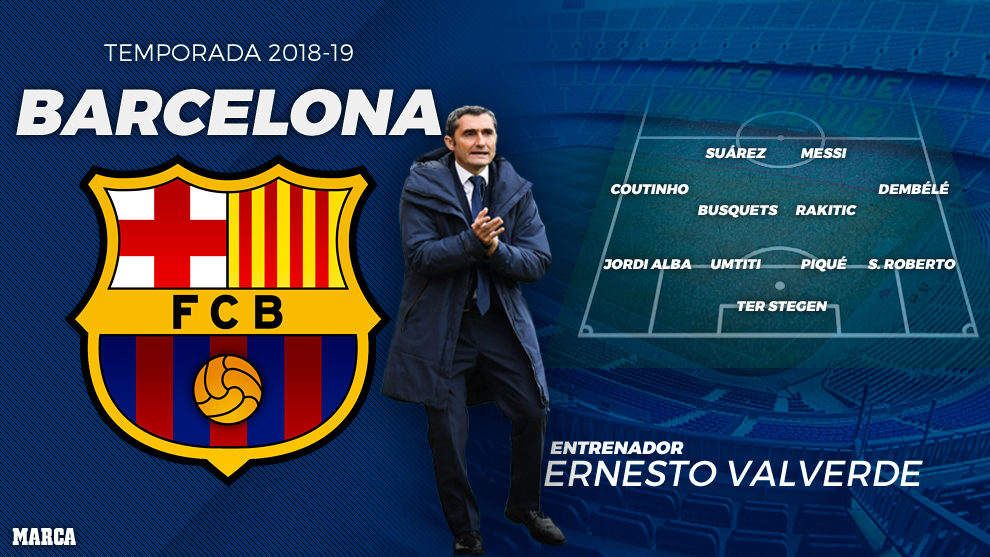 Europe is looking for a new king after Real Madrid\’s dominance of recent years. Their top rivals have made use of the summer market to improve their squads and make the Champions Leagueeven more exciting than usual.

MARCA wanted the opinion of its readers so that they could freely comment on which was, for them, the best eleven of the top candidates to win the competition this year. The result was overwhelming: 40 percent of the 91,099 votes cast were for Barcelona. Readers considered that the team that Ernesto Valverde has for this new and exciting campaign has improved a squad that was already very solid. The touch-ups in the midfield of Arturo Vidal and Arthur, plus the offensive nature of Malcom and a new centre-back, Clement Lenglet, have balanced out the side where it was needed.
Real Madrid have changed coach and that always generates certain doubts, but what has definitely cooled the mood of the readers is the move to Juventus for Cristiano Ronaldo, as well as the few signings made to try to soften the great scoring loss that many predict without the Portuguese. Even so, they\’re the second best XI in the vote with 22 percent.
Atletico Madrid occupy third place in this survey. Lemar, Rodri and Kalinic have been solid additions, and what is more important, they have managed to retain their main star, Antoine Griezmann. That, together with the important fact that the final will be played at the Estadio Wanda Metropolitano, make the rojiblancos the third best XI in Europe. Its competitive nature is a hallmark, as well as its defensive solidity. They received 11 percent of the votes.
Juventus, for their part, a finalist in recent years, have signed well and have an unexpected jewel in the crown; Cristiano Ronaldo. The arrival of the Portuguese has revolutionised the city of Turin. His signing has made heavyweights such asDybala and Pjanic decide to stay and form a fearsome XI, with the return of Bonucci to the defence, Cancelo for the right hand side and Emre Can in midfield. They are the fourth most voted for XI with eight percent, the same as PSG.
The Parisians have managed (except a last-minute surprise) to retain their spectacular attacking trident of Neymar, Mbappe and Cavani. With that front three, it is logical that they are among the best XIs in Europe. Even more so with Bufffon in goal. Hardly anyone else has signed, something similar to Manchester City (six percent). Guardiola hasn\’t done crazy things in this market and has only reinforced some positions, like in the attack with Mahrez for the right wing.
It is surprising that Liverpool, a finalist in the last edition of the Champions League, is in the penultimate place. Not even the excellent signings of Keita and Fabinho for midfield and Alisson to reinforce their weakest position have served to give readers a little more confidence. Only four percent of the votes cast believe that the Reds have the best XI in Europe. But worse was the vote for Bayern Munich – in last place with one percent. The team is almost the same, though Goretzka has been added to the squad.
By: marca