Skip to content
CELEB NEWS
May 15, 2019 SIR KENN 0 Comments SPORTS NEWS
Advertisements
Spread the love
Here are the full results from game week 12  across 6 league centres in the ongoing normalization committee special competition. There was three home and three away wins and the surprising one is Elmina Sharks beating WAFA at Sogakope park.

Both Hearts and Kotoko managed to winning through a spot kick after playing tough games.

Hearts of Oak vs Karela united

Hearts of Oak showed class as they defeated in-found side Karela united at the nations Wembley sports stadium.

Former Ebusua Dwarfs skipper Christopher Bonny gave us the maximum three points for converting a beautiful spot kick in the 74 minutes after both teams sold a beautiful game to football fans.

Hearts still remains on top of the zone B table with this victory.

Abdul Ganiu break the deadlock through a penalty kick.

READ ALSO: Very soon I will be preaching the ‘Word of God\’ – Actress Tracey Boakye

George Ansong goal in the 12 minute and Francis Owusu goal in the 25 minute well enough for the visiting Liberty to record a sweet victory over International Allies at the Tema sports stadium.

It was heartbreaking at the Sogakope park as Elmina Sharks traveled to surprise the West African football Academy by recording a goal to nil over them.

George Amonoo scored the only goal for his side.

Francis Twene scored the consolation goal for Berekum Chelsea as Kojo Owusu, Charles Mensah and Hope Avayevu pull one each for Bechem United.

The len clay sports stadium in Obuasi recorded the highest number of goals for the day in the ongoing normalization committee special competition.

Game between Cape Coast Ebusua Dwarfs and Dreams football club has been postponed due to heavy downpour and is expected to be placed come tomorrow.

Check the final scores below;

See the league table for Premier A and B after today\’s games as Hearts Of Oak already booked their place in the semifinals of the competition. 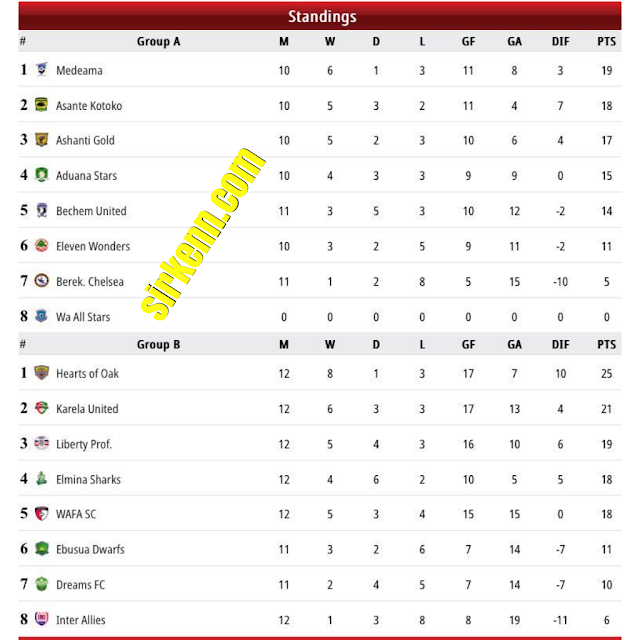 READ ALSO: Chris Attoh\’s late wife received many threats “all over” – Family reveals
Follow the link download our SIRKENN App and get the stories soon as we publish it
🇬🇭ADVERTISE YOUR MUSIC, VIDEOS & OTHER BUSINESS WITH US FOR THE BEST RESULTS @ THE MOST COMPETITIVE PRICE. CALL OR WHATSAPP THIS NO. 0205315950🇬🇭.

New crop of musicians should “fight” for awards” – Samini

VIDEO: Quamina Mp Talks About His Father’s Death In A New Interview