Skip to content
CELEB NEWS
May 31, 2019 SIR KENN 0 Comments ENTERTAINMENT FILLAS
Advertisements
Spread the love
Media practitioner Nana Aba Anamoah of GhOne TV has revealed the circumstances that led to how Ghana\’s two heavyweight Reggae/Dancehall artistes Shatta Wale and Stonebwoy finally throw away their egos and decided to work together and eat from one bowl.

Photos of both singers went viral after a fruitful meeting between them and some industry players led by senior new editor at GHONE TV, Nana Aba Anamoah, which suggested that the bad things which happened between them in the pass won\’t come again especially the VGMA@20  fracas.

Advertisements
READ ALSO: Stonebwoy and I have great vision for Ghana – Shatta Wale

Shatta shared himself and Stonebwoy with this touching message

Unity is strength Love is the key to many doors Brotherhood is Loyalty Peace is Freedom .. My brother and I got a great vision for Ghana music and we taking it to the world 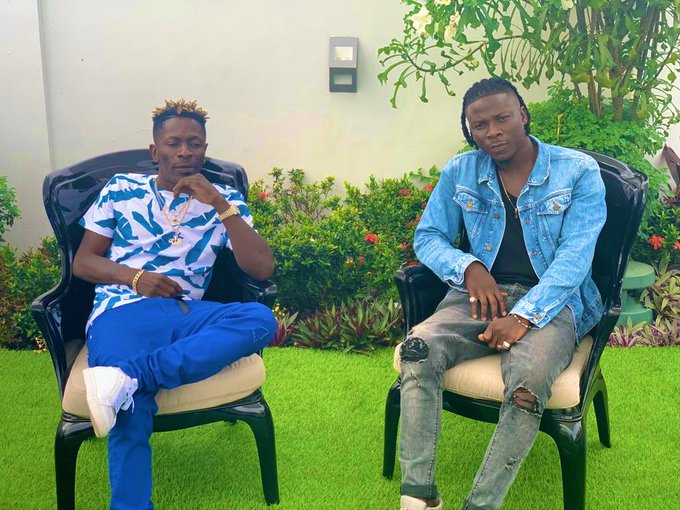 There has been talks about it whilst some says it is fake others believe they forced them but the main brain behind it Nana Aba has disclosed that the two musicians where already eager to unite and come together as one people as they confess to her anytime she speaks to them.

She first wrote this;
\”For those who questioned my silence on @stonebwoyb & @shattawalegh incident; they\’re both special. Getting them to smoke the peace pipe was important.  A big thanks to Dr. Kofi Abban for his immense support & vision for these two. Dr. Abban a.k.a Asomdwee hene, God bless you. You\’re one in a million. Shatta and Stone are eternally grateful for your kind words and wise counsel. To Bullet, Bulldog and BlackCedi, you\’re gems. God bless you. Long may Shatta and Stone RISE!

Read her interview on Kasapa FM below;

“Shatta is my good friend and every time I speak to him, he tells me he’s willing to meet Stonebwoy for fruitful chats and same for Stonebwoy. So we just needed the right time and the right place for it to happen. And we’re happy eventually this happened. I give credit to Dr. Abban who offered us his home and hosted the two musicians\” she stated.

She revealed this in an interview with Kwaku Owusu Adjei on Anopa Kasapa on Kasapa FM this morning.

See other photos from the meeting

Follow the link download our SIRKENN App and get the stories soon as we publish it
🇬🇭ADVERTISE YOUR MUSIC, VIDEOS & OTHER BUSINESS WITH US FOR THE BEST @ THE MOST COMPETITIVE PRICE. CALL OR WHATSAPP THIS NO. 0205315950🇬🇭.

Why I named my song Jennifer Lomotey – Kurl Songx